When the Universe Speaks

This is going to be a long post. If you are interested in reading it, please do so. Depending on when you read this, you might need an extra cup of coffee. If you read it later, who knows what you might need—an adult beverage of your choice.

On Soul Mates
You probably have figured out by now that Donna Roof is my soul mate. We have been together for 25 years, and we have often talked about marriage. However, since there has been such antipathy and animosity and derisiveness towards folks who are different (aren’t we all in some way or another?), we always have lived our lives as Don’t Ask; Don’t Tell, and we just went about our lives. We also figured that since we were both teachers, we would let people draw their own conclusions. When Indiana made marriage available, we talked about getting married, but didn't, and just simply went on about our lives without sharing our story.

On Getting Married
On Sunday night I sent private messages to Andrea Trevino and Tim Manges, both of my former students, both attorneys and one a judge—to ask what we needed to do to make a marriage happen as soon as possible. 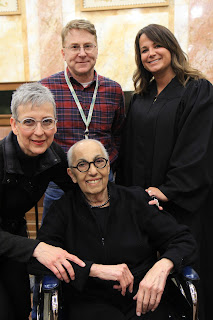 Both of them sprang into action to find out. As soon as we found out what we needed to do, we filled out the online applications. Since Andrea (Judge) had a short window of opportunity on Tuesday (December 11th) at lunch, we decided we would go for that. Since this was a spur of the moment decision, we wanted to keep all of this on the down low until we contacted our families so they could know before everything went into the public record.


On Tripping and Falling and Getting a Black Eye
On Monday I was feeling short of breath and incredibly tired, but we decided we were going to go ahead with everything. As fate would have it, I was getting up to go to the kitchen, and my foot got caught on either my slipper or my blanket, and I tripped and fell face first into the tv, busted my new glasses, cut my eye lid, and landed on my face. I yelled for Donna, and we headed for the ER because we wanted to make sure that I did not have a brain bleed or something worse. After about 3 hours at Parkview Randallia, I was released….no biggie except for a huge black eye…..and a hunger for a smoothie. Even though I have never been been to Smoothie King, at 9:00 at night, I was determined (even though I didn’t know whether they were opened or what they served) to have a smoothie with protein powder. The smoothie was what I needed because after drinking it, I had some energy for the first time in months, and I finally felt something like my old self for the first time in as long as I can remember. Apparently, my steady diet of bland food had left my system completely depleted of what I needed.

Donna kept asking me if I still wanted to go through with the wedding, and, of course, I said yes. I had a black eye, but what the heck?

The Universe Surprises Us
On to Tuesday morning—my eye was a mess, but I was feeling pretty good. The protein smoothie was what I had needed, so I decided I would have another one at some point this day. Then we headed down to the Court House. Surprisingly, when we saw some old SSHS colleagues and friends in the lobby, we figured something was up. Everyone at the Court House was extremely kind. They got me a wheel chair, and we headed up to one of the beautiful courtrooms. We were escorted where to go, and much to my surprise, through the main door in came a bunch of former colleagues and former students. Come to find out, our South Side Family had started a Facebook thread late Monday night in an effort to invite them to attend the ceremony. What an act of love! 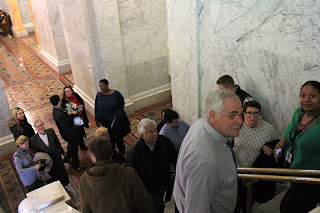 Donna and I were both choked up and blown away that some had come at the last minute. Some had driven up from Indy and others had taken off work. Some who couldn’t make it sent videos or emails or whatever to let us know they wanted to be there, but circumstances didn’t work. I am not very good at estimating numbers of people, but my guess is that 40 people showed up spontaneously. 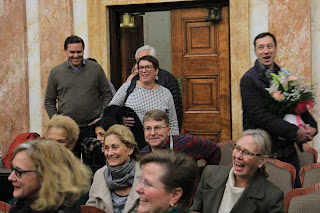 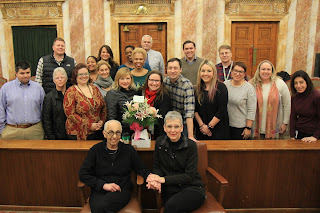 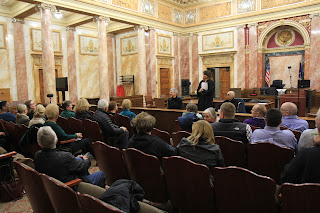 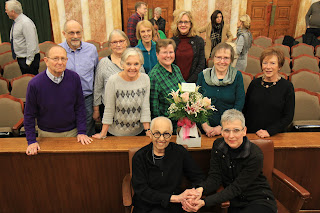 To make a long story longer….
The ceremony was short, sweet, and authentic, and the room was filled with so much love and positive energy that my heart was full and the day ended up perfectly. I was pretty tired and out of breath, but it was one of the most beautiful days I have ever experienced. Who would have thought that anyone could have a mini flash mob wedding at the Court House?

The Honeymoon
One of the reasons that we wanted to get this done so quickly was because I had chemo scheduled for Wednesday, and I knew that I would be more useless than usual because chemo is pretty much long and boring and uneventful. So yesterday we spent our day at PRMC Cancer Unit…and of course, since Sherlock always needs to be involved, I had an embarrassing bag leak disaster, and I was beyond exhaustion.

On Labels
Interestingly enough, I hate labels. A few people asked me when did I know that I was gay. Gay is just a word, and I have never been attracted to people because of their gender. I might be curious about their bearing or their looks or whatever, but I have never given a rat’s ass about their gender. I am attracted by someone’s smile or their laugh or their general kindness or decency.  I am more concerned about whether you wash your hands when you go to the bathroom than what is inside your pants...also, I am concerned whether you know which way to hang the toilet paper....the paper must go over not under.

When the judge pronounced us wife and wife, I got to thinking about labels. Since I hate most marriage labels (husband, wife, partner, whatever), as much as I hate the word spouse, that one is closest to what we are…..but as a couple, I would much rather think of us as Spice. Thus, instead of Donna being my spouse, she is my Spice, and we are Spice Girls. It works for me. 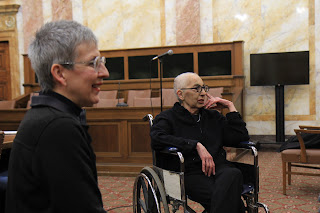 I have not planned to send Christmas cards this year, but I wish you all a wonderful Christmas or whatever you celebrate. For those of you who have sent Facebook messages or calls or videos, thank you from the bottom  of our hearts.

WE LOVE YOU ALL!