Throughout this whole cancer schmantzer odyssey, I have found that it is a fool’s errand to anticipate outcomes; consequently, I have learned to expect the unexpected. Yesterday on the drive to my appointment with my gynecological/oncologist, we joked that she might say, “We were just fooling. You are outta here.”

While that would have been nice, it wasn’t to be. My doc explained in detail with a lot of big cancery/medical words about what she had found during my extensive surgery. Apparently, my surgery was much more involved than I realized.

After we discussed the entire pathological report, I asked my doc some not so scientific but very practical questions. The good news is that I can start taking baths instead of showers, I can sleep on my stomach, and I can drive again--as long as I can brake quickly. Since I have been managing to drive the electric grocery store carts, I figured that driving my car would be a piece of cake. 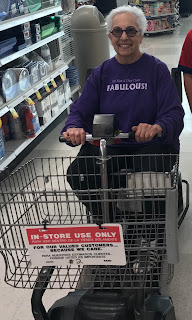 Among other topics of importance to me, I asked the doc if I would still be able to take my grandsons to a Cubs’ game that we have been planning to attend in July. She said that she thought I would be able to do that but that I should have a back up plan just in case. When I asked her about my chances for survival, she said that while this stage 4 cancer is incurable, it is most definitely treatable. She said that most of her “chemo girls” begin to feel better and stronger once their chemo has begun. I can live with that.

Interestingly enough, she told me that my case had gone before the tumor board again—a record 3 times—and she asked all of the docs some hard questions about whether or not they should proceed with chemo, and they all agreed that this looks treatable. Right now it looks as though my chemo treatments will be different from the original plan. I gathered that my oncologist will probably want to start the chemo as soon as possible. As long as my oncological team thinks I am healed enough to begin, I just want to get on with this.

On the way home, Donna asked me how I was feeling both physically and emotionally. Physically, the site of the incision is still pretty tender and slightly uncomfortable. Emotionally is a different story. This whole magical mystery tour has been going on since last September, and at this point, I feel slightly exhausted and overwhelmed. Having said that, I try to make it a point not to feel sorry for myself or to play the victim, and while my current situation is not one I would have chosen, I will deal with it in the way that I have always dealt with whatever shit-storms come my way. I will put one foot in front of the other, I will set small goals each day, I will continue to appreciate the friends and family who have offered me so much love and support, and like Charlotte Emory (the main character in Anne Tyler’s Earthly Possessions), I will keep on truckin’.

Given how screwy and unpredictable my case has been, I fully expect my oncologists to be in the running for a Nobel prize for medicine, and since I have total confidence in them both as physicians and as caring human beings, I hope they start engraving that prize very soon.
Posted by Phyllis Bush at 9:20 AM