The past two weeks have been a whirlwind of highs and lows. I have been incredibly busy, watching the Cubs win their division, traveling to Indianapolis, going to an amazing class reunion, and fielding enough phone calls to make me feel like Lily Tomlin's infamous telephone operator, Ernestine. While all of this has been busy and exhausting, life continues and so do I.

In my last post I mentioned  all of the frustrations of my port and its access to the blood return. So my oncology  team decided that I needed to do a CT dye scan to see if there were  problems with my catheter. As soon as the techs saw the scan, they noted that the catheter had a loop in it, which was causing the issues. When things go belly up, I often figure it is because I have done something dumb, so I asked them if my working in the yard could have caused the pick line to loop. The nurses told me that unless I was moving boulders, that was highly unlikely. Of course, I didn't tell them about my Sisyphean desire to fix all that is wrong in the world.

After numerous calls between my doctor and me, we finally decided that my port needed to be replaced, and they quickly tried to schedule this minor surgery in short order.  I was able to have my port replaced on Monday. In the meantime, since I am now half way through my treatments (7 down, 5 to go), I had yet another CT scan on Friday to see if the chemo is working.

All of this caused this past weekend to be a rather stressful weekend where I lost my faux-Zen and started to imagine the results of what might lie ahead. When I talked with my doctor on Tuesday morning about what the scan meant, he  said that there was nothing that he could see that raised his concern about my CT scan. Even though I was hoping that he would say, “We were just fooling...all is well,” I was reasonably sure that that would not be the case. Apparently, my cancer  is being treated as a chronic condition for now...and I can live with that.


Even though I have steeled myself against the worst possible outcome, the past couple of weeks with all of its ups and downs have been quite draining. While I have been preparing for the worst, the most trivial of things  bring on unexpected emotional breaking points.  A few days ago in the midst of my whirlwind of activities, I stopped to drop off some dry cleaning at the place where I have gone for almost 30 years and saw a sign that they had gone out of business. Seeing this unwanted bump in the road, Donna and I were on the brink of crying. On top of that, Zesto Ice Cream is now closed for the season. Sadly, it is the small things that are most likely to drive us over the edge.

I have been dealing with cancer schmantzer for over 6 months, and yet I am still blown away by the fact that life can turn on a dime. So many people have been affected by both natural disasters and man-made massacres. Who knows what the reason is for any of the heartaches which lie before us? Whether it is disease or climate change or random acts of violence, it is important for us to recognize that we are good people, and the humanity within most of us causes us to reach out to do whatever we can to show kindness and love to one another. 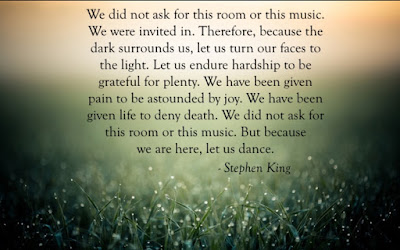